At the outbreak of the First World War Britain intended to send three forces from its Indian Army overseas. The largest, Indian Expeditionary Force A, was headed for France. IEF B and C were both to be sent to East Africa, the former to attack German colonies and the latter to defend British ones.

Once it became likely that the Ottoman Empire would enter the war on the side of the Central Powers an additional force, IEF D, was sent to Basra in the Persian Gulf, now part of Iraq but then Ottoman territory. The British in those days normally called modern day Iraq Mesopotamia.

The IEF sailed from India on 16 October. The Royal Navy’s role in the transport of IEF A and C was confined to protecting them from German cruisers by escorting them to their destinations. However, IEF B and D had to land on enemy territory.

IEF B arrived at Tanga in German East Africa (now Tanzania) on 2 November, landing the next day. On 4 November it was defeated by local German forces commanded by Paul von Lettow-Vorbeck. The defeated troops were re-embarked the next day.

The British Official History of Naval Operations suggests that defeat was owed ‘partly perhaps to insufficient artillery support from the sea.’[1] The expedition was accompanied only by the protected cruiser HMS Fox. The pre-dreadnought battleship HMS Goliath had suffered mechanical problems and the modern light cruisers HMS Chatham, Dartmouth and Weymouth were blockading the German light cruiser SMS Königsberg in the Rufiji River.

IEF D was intended to protect Britain’s interests in the Gulf, the most important of which were the oil refinery on the Persian (now Iranian) island of Abadan at the mouth of the Shatt at Arab river and the pipeline connecting it to the Persian oilfields. The oilfields, pipeline and refinery were owned by the Anglo-Persian Oil Company (now BP).

The Royal Navy had gradually switched from coal to oil in the 10 years leading up to the war. By 1914 the light cruisers and battleships under construction were to be fuelled exclusively by oil. This meant that it needed secure supplies, so in 1914 the Admiralty took a 50% stake in APOC and gave it a 20 year supply contract in return for providing the capital needed to develop the Persian oilfields.[2]

‘It is…of urgent importance that the troops indicated should be sent at once in order to safeguard our supply of oil…This question of defence has nothing to do with the investment of Government capital in the Company…It is necessary in order to ensure the due supply of oil required for the Fleet.’[3]

On the other hand, Winston Churchill, who as First Lord of the Admiralty was responsible for the deal with APOC, disagreed with Slade, writing on his minute that ‘[t]here is little likelihood of any troops being available for this purpose. Indian forces must be used at the decisive point. We shall have to buy our oil from elsewhere.[4]

Churchill’s reluctance to protect the Persian oil installations appears surprising given his role in the government’s purchase of shares in APOC, but it is consistent with his pre-war opinion. In a 1913 Cabinet memorandum on naval oil supplies he assumed ‘that in time of war money would be no object.’[5] The objective of the APOC contract was to build up an oil reserve of six months’ wartime naval oil consumption relatively cheaply in peacetime.

The oil facilities were very important, but they were not Britain’s only interest in the region. It is now assumed that everything in the Middle East is about oil, but in 1914 General Sir Edmund Barrow, the Military Secretary to the India Office, argued that:

‘troops could be landed on Persian soil at Mohammerah [now Khorramshahr] or at Abadan island, ostensibly to protect the oil installation, but in reality to notify to the Turks that we meant business and to the Arabs that we were ready to support them… With the Arabs on our side a Jihad is impossible, and our Indian frontier is safe from attack.’[6]

Britain then had good relations with a number of Arab rulers who were nominally subjects of the Ottoman Empire but had a fair degree of autonomy. It feared that in a war with the Ottoman Empire the Ottoman Sultan, who was also the Caliph, might call a Jihad, resulting in a revolt by Britain’s Muslim subjects, especially in British India, which included modern Pakistan and Bangladesh.

Despite Churchill’s views IEF D was sent to the Gulf. It initially consisted of the 16th Brigade of the 6th (Poona) Division, commanded by Brigadier-General Walter Delamain.

There were only three small British warships in the region: the sloops HMS Espiègle and Odin of the Cadmus class and the Indian Marine ship Dalhousie. They were too small to deal with SMS Emden, which was known to be in the Indian Ocean, so IEF D was escorted by the pre-dreadnought battleship HMS Ocean, captained by Captain Arthur Hayes-Sadler, who was put in charge of the naval part of the operation.

IEF D reached Bahrain on 28 October. The next day the Ottoman fleet, commanded by the German Admiral Wilhelm Souchon, and including the battlecruiser Goeben and the light cruiser Breslau, attacked Russian bases in the Black Sea. On 30 October, Delamain was ordered to proceed to the Shatt-al-Arab and another brigade of the 6th Division, the 18th, was sent to the Gulf. The next day he was warned that war with the Ottoman Empire was imminent.

Lord Crewe, the Secretary of State for India, had given the following instructions to the Indian Government regarding the operation:

‘The intention is to occupy Abadan, with the Force under orders, protect the oil-tanks and pipe-line, cover the landing of reinforcements, in the event of such being necessary, and show the Arabs that our intention is to support then against the Turks.’[7]

The British force reached the sandbar in the estuary of the Shatt-al-Arab on 3 November. Two days later Britain declared war on the Ottoman Empire. The next day the convoy entered the Shatt, apart for Ocean, which was too big to cross the bar. A battery of four guns beside the ruined fort of Fao was quickly silenced by Odin and the position taken by a landing force of 600 men. An Ottoman force appeared near Abadan, but were dispersed by gunfire from Espiègle. 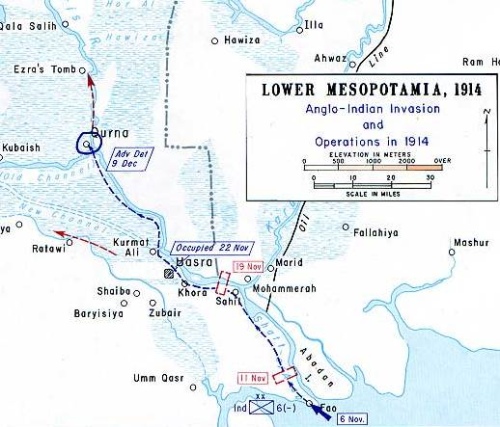 Source: http://commons.wikimedia.org/wiki/File:Meso-WW1-1.jpg
Original Source: http://www.westpoint.edu/history/SiteAssets/SitePages/World%20War%20I/WWOne43.jpg
This work is in the public domain in the United States because it is a work prepared by an officer or employee of the United States Government as part of that person’s official duties under the terms of Title 17, Chapter 1, Section 105 of the US Code

Delamain then took the rest of his brigade, two or three miles up the river and landed on the Ottoman side. By 10 November his troops, less a small garrison at Fao, were entrenched in a position that covered the oil refinery. An Ottoman attack on 11 November was beaten off.

The Ottoman telegraph cable from Upper Mesopotamia connected to the British one to Persia and India at Fao. The Ottomans had cut the cable, but the British quickly repaired it.

By 15 November the 18th Brigade and the artillery and divisional troops of the 6th Division had arrived. Its commander, Lieutenant General Sir Arthur Barrett, had instructions to take Basra. Intelligence from prisoners indicated that an attack by up to 10 Ottoman battalions was likely. A rapid victory was also likely to impress the Arabs, so Barrett decided to move on Basra quickly.[8]

Delamain’s brigade, plus two batteries of mountain artillery, defeated an Ottoman force at Saihan on 15 November. By the next day all the infantry and cavalry but only part of the artillery was ashore. Barrett decided to advance, with Odin, Espiègle, the armed yacht Lewis Pelly and the armed tug Sirdar-i-Naphte providing fire support from the river.

The main Ottoman force covering the route to Basra was attacked on 19 November at the mud fort at Kut-az-Zain. The Ottomans withdrew once the fort was destroyed by artillery and naval gunfire, but heavy rain turned the ground into a quagmire, meaning that the British cavalry could not turn the retreat into a rout. This action is referred to as being at Sahil by the British Official Histories.[9] “Sahil” is actually the local word for “shore”, so the name probably results from a misunderstanding.[10]

The Ottomans now made an attempt to block the Shatt-al-Arab using a Hamburg-Amerika liner that had been trapped in Basra and a number of smaller vessels. Barrett’s force was dependent on river transport, so this was potentially a very serious setback to his plans

On 19 November Hayes-Sadler went to investigate the obstacle in Espiègle. She came under fire from a shore battery of four 15 pounders, an armed launch and the gunboat Marmariss. Espiègle silenced the shore guns, sank the launch and forced Marmariss to withdrew without being hit herself. It then transpired that the passage was not completely blocked.

The Ottoman forces defending the approach to Basra and the city’s garrison withdrew the next day. By 5 pm on 21 November Espiègle, Odin and the newly arrived Indian Marine ship Lawrence were anchored off Basra’s Custom House. A blank round was fired in order to discourage looters, and naval parties were landed to deal with the fires that they had started. The first infantry arrived on the morning of 22 November.

The next stage of the campaign was an advance up river to Qurna, which was taken on 9 December. The initial objectives had then been achieved, but the Mesopotamian Campaign then grew as a result of mission creep. The capture of one place led to claims that somewhere else had to be taken to protect it. Easy early victories led to over confidence and there was a desire for further victories in a war that was going badly.

The lack of railways and roads meant that the Rivers Euphrates and Tigris were vital for communications, meaning that the RN continued to play an important role in this land campaign.

[7] PP, Mesopotamia Commission. Report of the Commission Appointed by Act of Parliament to Enquire into the Operations of War in Mesopotamia, Together with a Separate Report by Commander J. Wedgwood, D.S.O., M.P., and Appendices, HMSO 1917 [Cd. 8610]. p. 12.