The Royal Navy and Passchendaele

The Third Battle of Ypres began on 31 July 1917. The Battle of Passchendaele was strictly speaking its final stage, but is now frequently used to refer to the whole battle. The First Battle of Passchendaele took place on 12 October and the Second officially lasted from 26 October to 10 November, although fighting in the area continued into December.[1]

According to Sir Douglas Haig, C.-in-C. of the British Expeditionary Force, the Allied plan was to wear down the enemy by a series of attacks, before the principal blow was struck by the British. The attack at Ypres was intended to capture the Belgian coast as far as the frontier with the Netherlands. It would involve a series of steps: first take the Passchendaele-Staden-Clerken ridge; then advance to a line from Roulers to Thourout in order to take the enemy coastal defences in the rear; and finally land from the sea along with an attack from Nieuport.[2]

The battle with U-boats that had intensified when the Germans began unrestricted submarine warfare on 1 February was a factor in the plans. Admiral Sir John Jellicoe, the First Sea Lord, wrote to Admiral Sir David Beatty, C.-in-C. of the Grand Fleet on 10 July about a plan to attack Ostend and Zeebrugge. He noted that David Lloyd George, the Prime Minister, was against the military operation because it would lead to heavy casualties and every man was needed for the next year’s campaign. Jellicoe, however, thought that if the Allies waited until 1918, they might ‘never get the chance.. [and that they] must [his emphasis] get the north coast of Belgium before the winter sets in.’ Beatty wrote a question mark against the last comment.[3]

Haig told the War Cabinet that he was confident that the operation would take the Passchendaele Ridge and clear the Belgian coast. Jellicoe said that lack of shipping would mean that the war could not continue in 1918. Lloyd George challenged this claim, which he found ‘startling and reckless’, but Jellicoe stuck to it.[4] Haig wrote in his diary that nobody present agreed with Jellicoe, whose words were: ‘There is no good discussing plans for next spring. We cannot go on.’[5]

Admiral Sir Reginald Bacon, commanding the Dover Patrol, was concerned that the Germans could wipe out the British naval forces in the Channel by an attack from destroyers based at Ostend and Bruges. These harbours were too well protected by shore batteries to be attacked by the sea and were supplied by railway rather than sea. As the Germans could choose their time, the British needed to have almost three times as many ships in the area as the enemy in order to be able to always have a force at sea equal to the attacking force. Control of north Belgium allowed the Germans to launch air raids against Britain.

Bacon worried that the Germans would keep the Belgian coast if they held it when the war ended, creating a future threat to Britain. He attributed the Germans failure to attack so far to their lack of ‘any real sea instincts’ but feared an attack soon as ‘they have improved vastly in sea initiative.’[6]

Bacon had suggested an amphibious landing to Haig in December 1915. The next month Haig asked him to produce a detailed plan, which would take place once British troops attacking from Ypres were near Roulers. Haig appointed General Aylmer Hunter-Weston to work with Bacon. Hunter-Weston thought that Bacon’s plan was land at Ostend was too risky, and Bacon changed his plans when the defences there were strengthened.[7]

Tim Travers describes Hunter-Weston’s leadership at Gallipoli as having been ‘poor.’[8] According to Michael LoCicero he was thorough in carrying out inspections, albeit with much attention to minor details, and was willing to lead from the front in mobile operations but tended to emphasise ‘planning and staff work…[in] trench warfare.[9] Although a poorly regarded commander, he may therefore have been better at reviewing plans than implementing them.

The German attack on the French at Verdun then forced the Allies to change their plans. The British became the leading force in the attack on the Somme rather than playing a supporting role to the French, which meant that Haig had to abandon his preferred plan to attack at Ypres.[10]

The amphibious landing on the coast was therefore abandoned until the attack at Ypres was revived in 1917. Bacon’s plan was to land to the west of Ostend. The problem with landing to the east was that sea communications with the invasion force until the shore batteries were taken or the land force advancing from Nieuport arrived. An assault to the west, however, meant scaling a 30 foot scale sea wall that sloped at 30 degrees and had an overhanging buttress three feet high. The solution to this was to have two monitors push 550 foot long landing piers carrying the invasion force to the sea wall.[11] 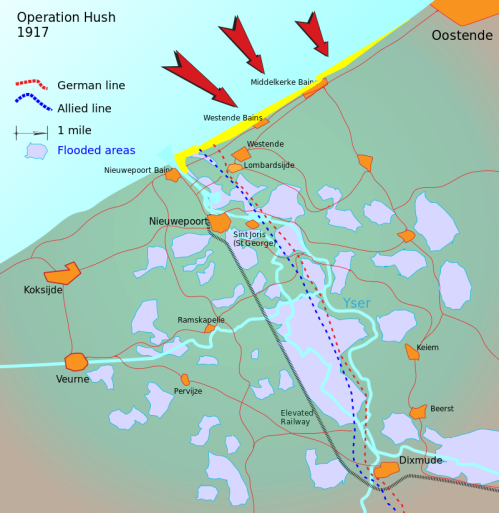 Monitors were slow, shallow draught ships armed with a single heavy gun turret and intended to be used for shore bombardment. They looked like the USS Monitor of American Civil War fame, hence their name. The ones assigned to the invasion were HMS General Wolfe, General Craufurd, Lord Clive, Sir John Moore, Prince Eugène and Prince Rupert.[12] They each displaced 6,150 tons, had a crew of 194, a maximum speed of 6.5 knots and an armament of a twin 12 inch gun turret and 2 quick firing three pounders.[13]

Exact details tides, water depths and the courses to be steered were required. The necessary information was obtained by submarine and aerial reconnaissance. A method used to ensure by telegraph cable laying ships was to be used to keep the monitors to the exact course needed.[14]

The invasion force was to include tanks. A replica of the sea wall was built in order to test how the tanks could scale it, which they were able to do once a special ramp had been built for them.[15]

The landing force consisted of 13,750 men of the 1st Division of General Sir Henry Rawlinson’s 4th Army. There would be three columns, each consisting of an infantry brigade reinforced with supporting troops including three tanks, four 13 pounder guns and two small howitzers, over 200 bicycles and three motor bikes. The two flanking columns would also include a motor machine gun battery and ammunition transport.[16]

The land attacks moved far more slowly than planned. The amphibious operation was called off on 15 October as, although the land offensive continued, the seas were by then to rough for a seaborne landing.[17]

Jellicoe told Admiral William Sims USN after the war that the planned amphibious assault ‘was a splendidly conceived and organised operation…[that he] firmly believe[d] would have succeeded..[had] the atrocious weather…[not] prevented the Army…getting far enough forward for the landing to take place.’[18]

It is difficult to say what would have happened had the amphibious assault taken place. WWI operations rarely went to plan and the only precedent is at Gallipoli, where the landings went badly. It was, however, carefully planned and, unlike Gallipoli, made use of specialised equipment. The Germans would have had to have been badly beaten elsewhere for it to have taken place. It was certainly imaginative.

British sailors were, however, involved in the Third Battle of Ypres. The Royal Naval Division was formed at the outbreak of war from naval reservists who were not needed at sea and Royal Marines plus some men who volunteered specifically for it. It had the infantry manpower of an army division but lacked supporting units such as artillery and medical services.

It was sent initially to Antwerp. A number of its men were unable to withdraw to Britain when Antwerp fell and were interned in the Netherlands. It was then sent to Egypt and then to Gallipoli. After the Gallipoli campaign it was transferred to the War Office and renamed the 63rd (Royal Naval Division). Thereafter it was fully equipped and operated under army control, serving on the Western Front from May 1916 until the end of the war. It fought in the Second Battle of Passchendaele (26 October to 10 November 1917).

Fighters of No. 4 (Naval) Wing and bombers of No. 5 (Naval) Wing of the Royal Naval Air Service, based at Dunkirk, flew in support of the land offensive.[19]

By the end of the Third Battle of Ypres the British Empire forces had not taken even all of the Passchendaele-Staden-Clerken ridge, never mind advanced to the Roulers to Thourout line.

All that can be said with certainty is that the British failed to take their objectives and that the battle cost both sides heavy casualties. The Germans, fighting both the British and French Empires with United States soldiers soon to arrive, could afford this level of losses even less than the Allies.

2 responses to “The Royal Navy and Passchendaele”