Napoleon’s victory at Rheims on 13 March 1814 put his army in between Prince Gebhardt von Blücher’s Army of Silesia and Prince Karl Phillip zu Schwarzenberg’s Army of Bohemia. The Army of Silesia, temporarily commanded by General August von Gneisenau because Blücher was ill, retreated to Laon, where it had defeated Napoleon on 9-10 March.

This gave Napoleon an opportunity to move south with 24,000 men, including 4,500 recently arrived reinforcements, in an attempt to stop Schwarzenberg’s 122,000 troops advancing on Paris. He left 21,000 men under Marshals Auguste de Marmont and Édouard Mortier to cover the 100,000 strong Army of Bohemia. Marshal Jacques Macdonald, with 42,000 troops, had been ordered to hold back the Army of Bohemia, However, his force had been forced to retreat, and was reduced to 30,000 men by 17 March.[1]

Napoleon had a choice of three routes of advance: to Arcis-sur-Aube to threaten Schwarzenberg’s rear; to Provins to join Macdonald in front of Schwarzenberg; or to Meaux. The last option would take him closer to Paris and there was a bad crossroads on the second route, so he chose the first, which he said ‘is the boldest, and its results are incalculable.’[2]

The French advance began on 17 March. Napoleon now had a bridging train, enabling his army to move faster than it had been able to earlier in this campaign. However, Schwarzenberg, after learning of the Coalition defeat at Rheims, began to retreat to Troyes on the same day. Macdonald was unable to prevent him doing so.

Napoleon decided to advance on Arcis-sur-Aube, which he thought was held only by a small rearguard. From past experience he thought that defeating it would result in Schwarzenberg retreating. However, the Austrian had decided to take the offensive. 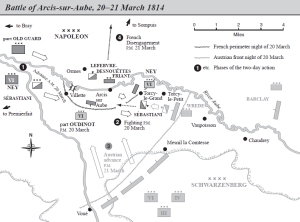 The French took Arcis without opposition by 11 am on 20 March. Napoleon arrived at 1 pm and ignored reports that there were large enemy forces advancing on Arcis. Instead he unquestioningly accepted a report by one officer that the only Coalition troops nearby were 1,000 Cossacks, which suited his ‘preconceived notions.’[3]

At 2 pm Schwarzenberg launched a major attack. Coalition cavalry at first forced back General Horace-François-Bastien Sébastiani’s outnumbered French cavalry, despite the support of Marshal Michel Ney’s corps. However, Napoleon put himself at the head of some newly arrived Old Guardsmen and rallied the cavalry. He frequently exposed himself to enemy fire in this campaign. At one point he deliberately rode his horse over an enemy howitzer shell just before it exploded. The horse was killed, but the Emperor was unharmed.

After dark Sébastiani, with the addition of 2,000 recently arrived French cavalry, commanded by General Charles Lefebvre-Desnouëttes, launched a charge that routed two Coalition cavalry divisions. Their advance was halted by Russian artillery, but they retreated in good order.

The French held the field after the first day and lost fewer men than the over 2,000 casualties that they had inflicted on the enemy.[4] Napoleon still believed that he had fought the enemy rearguard, which had just been bigger than he had expected. However, Schwarzenberg had massed over 80,000 men, hidden on reverse slopes, to attack the next day. Some more French reinforcements arrived overnight, but Napoleon had only 28,000 men, including 9,000 cavalry at dawn on 21 March.[5]

F. Loraine Petre argues that if Napoleon had not ignored the reports that he faced a major opponent he could have safely moved across the Aube at night. He could then have left Macdonald behind in a defensive position, whilst threatening the Coalition lines of communication by operating along the north bank of the Aube. Tsar Alexander feared that he would do this, which would probably have forced Schwarzenberg to retreat.[6]

On the morning of 10 am Schwarzenberg delayed ordering an attack as he was uncertain of Napoleon’s strength and intentions and because the Tsar opposed a Coalition offensive. Napoleon at first continued to believe that he faced only the enemy rearguard, but waited for the arrival of Macdonald.

Just after 10 am Napoleon, unaware of how many enemy troops were hidden on the reverse slopes, ordered Sébastiani and Ney to advance from Torcy-le-Grand on his left flank. They stopped on seeing the size of the Coalition army.

Petre argues that a bold Coalition attack at this point ‘must have swept the French bodily into the river.’[7] However, Schwarzenberg did not decide to issue attack orders until after a council of war at noon, and the attack would not start until he gave the command.

Napoleon acted quickly once he realised that he had been acting on false assumptions. He issued orders to retreat across the bridge at Arcis and a pontoon bridge that was to be hurriedly built at Villlette. The pontoon bridge was ready by 1:30 pm.

Schwarzenberg did not attack until 3 pm, when he finally realised that the French were retreating across the river. The rearguard was commanded by Sébastiani, who got most of his cavalry across the pontoon bridge before destroying it, and Marshal Nicolas Oudinot; his outnumbered troops fought in Arcis until 6 pm, when they withdrew across the bridge and destroyed it.

Over the two days the French suffered about 3,000 casualties and the Coalition 4,000.[8] The Coalition did not try to pursue the retreating French, who reached St Dizier on 23 March.