The Siege of San Sebastian 1813

Following Wellington’s victory at Vitoria his Allied army of British, Portuguese and Spanish troops began the siege of San Sebastian on 7 July 1813, with Sir Thomas Graham in command. The Allied army was in a position to assault the fortress by 22 July, but Graham delayed for three days, allowing the French commander, General Emmanuel Rey, to reinforce his defences; the attack failed.

Marshal Nicolas Soult had been put in command of the French army in the Pyrenees on 12 July. He rallied, reorganised  and reinforced the army that had been beaten at Vitoria, and launched a counter-attack. He forced the Allies to retreat after the battles of Maya and Roncesvalles on 25 July, but was defeated by Wellington in two battles at Sorauren on 28 and 30 July.

Wellington was therefore able to resume the siege of San Sebastian. Extra guns were unloaded from ships on 6 August. More arrived in three convoys between 19 and 23 August, along with 92 members of the newly formed Corps of Sappers and Miners. Previously Wellington’s only engineers had been officers, with the manual work being done by infantrymen. He now had specialist troops with which to conduct the siege.

The bombardment began on 26 August, employing the following guns:

A further 15 x 24 pounders, 8 x 18 pounders and 4 x 10 inch mortars had been delivered, but they were on traversing platforms intended to be secured to a fortress. The recoil effect meant that guns being fired from temporary emplacements in a siege needed wheeled carriages. However, they had come with a supply of ammunition, and their barrels could be used to replace those of any that were damaged in the siege.[1]

A decoy attack was made on 29 August in an attempt to trick the garrison into prematurely detonating mines placed to defend the breach in the wall, but they were not fooled. The engineer officers stated on 30 August that the breach was practicable for an assault, but others feared that the wall had fallen in a manner that created many obstacles for an attacker. 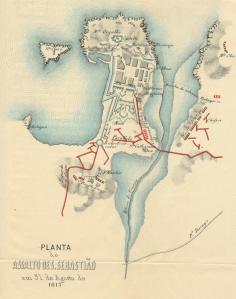 Wellington decided to launch the attack at 11am on 31 August at low tide: the fortress was on the coast. The breach was, as many had thought, difficult, and the attackers struggled at first.

Graham, probably after consulting Colonel Alexander Dickson, his artillery commander, ordered the siege guns to fire in support of the attacking infantry. This was a very unusual tactic for the period, because of the risk of hitting the attackers, but it worked. The town was taken by 2pm, but the French still held the castle.

As had happened in Wellington’s previous successful sieges, Ciudad Rodrigo and Badajoz, British discipline held during the attack, but broke down afterwards. Soldiers went on drunken pillages of rape, theft and murder. The town caught fire. Some Spaniards accused Wellington of deliberately setting it alight, but Jac Weller claims that, if he had wanted to do so, he could have done so as part of the initial bombardment, resulting in fewer casualties to the attackers.[2]

Charles Esdaile notes that some, including Wellington, justified the sack on the grounds that the population of San Sebastian were pro-French and had fought for the defenders.[3] However, Esdaile goes on to argue that it was ‘a disgrace – a war crime, indeed. And in political terms, of course, it was a disaster.’[4]

See this blog for accounts of the sack of San Sebastian, some in English, some Spanish.

The castle surrendered on 8 September after an artillery bombardment. Casualties in the siege were 3,700 Allied and 2,500 French killed and wounded and 1,000 French captured.[5] Sir Richard Fletcher, Wellington’s engineer commander, was amongst the dead.

Wellington was not at San Sebastian on 31 August, as he had received intelligence that Soult was planning an attack to relieve the siege. Three French divisions attacked the same number of Spanish ones defending a ridge at San Marcial, overlooking the River Bidassoa.

The first two French attacks were beaten off. The third managed to get a foothold on the ridge, but the Spanish brought up another division and forced the French back. The Spanish proved to be the equal to the French in individual combat. Casualties were 2,500 French and 1,700 Spanish. Another French attempt to cross the Bidassoa, at Vera, was also defeated, with 1,300 French and 850 Allied casualties.

Any French threat to Spain was now ended. Pamplona was still in French hands, but was starved into submission by 30 October.

Much of this account is based on Frederick Myatt’s British Sieges of the Peninsular War, which itself relies heavily on the letters of Lieutenant-Colonel Augustus Frazer of the Royal Artillery.[6] They are available online at archive.org.