I recently attended Top Secret, an exhibition at the Science Museum in London about codebreaking, ciphers and secret communications. It has now finished but will open again at the Manchester Museum of Science and Industry in October 2020.

The exhibition was timed to coincide with the 100th anniversary of the foundation of GCHQ [Government Communications Headquarters], the UK’s Intelligence, Security and Cyber agency. The exhibits came mostly from the historic collections of the Science Museum and GCHQ, with most of the latter never having previously been shown to the public.

Code:  A process that replaces a word or phrase with an arbitrary symbol of group of characters (numbers or letters).

Cipher: A repeatable, standardised process that replaces one character with another to encrypt a message.

Cipher machine: A machine that automatically encrypts a message one character at a time using a cipher.

Key: Use of ciphers is governed by secret settings called a ‘key’ shared between authorised users to make sure only they can decipher the message.

The exhibition generally talked about code-breakers and decoding. I have followed this terminology.

The exhibition began by describing the history of codes and ciphers. In 405 BCE, the Spartan general Lysander is said to have received a secret message that was revealed by winding a piece of parchment round a rod of a particular thickness.

By 50 BCE, simple ciphers that replaced each letter of a word with another were being  used. These were named Caesar Ciphers after the Roman general Julius Caesar, but their use predated him.

Around 850 BCE, the Arab scholar and mathematician al-Kindi became the first person to describe a system of deciphering encrypted messages based on how often a language uses each letter, now known as frequency analysis.

The British government was intercepting and reading encrypted messages long before the foundation of GCHQ. Information found in decoded messages implicated Mary Queen of Scots, exiled in England, in a plot to assassinate Queen Elizabeth of England and put Mary on the English throne. Mary was executed as a result.

After the War of the Three Kingdoms, also known as the English Civil War, Oliver Cromwell’s government protected itself against plots to restore the monarchy by intercepting and decoding letters from Royalist supporters.

In 1844, the British intercepted and decoded letters from Guiseppe Mazzini, the leading campaigner for Italian unification, who was then living in London. The decoded messages were shown to the government of Austria, which then controlled northern Italy, with the rest of the country being divided into small states.

The bulk of the exhibition was concerned with the 20th and 21st centuries.

During the First World War, underground telephone networks were laid throughout the trench systems. It was initially possible for the enemy to overhear conversations. However, the Fullerphone, invented by Captain, later Major General Algernon Fuller of the Royal Engineers allowed secure communications and avoided interference between different lines.

German Zeppelins were detected by their radio signals, thanks to a network of Marconi direction finders.

In 1914, Britain had a global network of communications cables. So did Germany, but at the outbreak of war, the Royal Navy cut the German cables. This meant that Germany had to communicate with its overseas embassies by radio, which the British were able to intercept and decode.

The Germans were allowed to use a Swedish cable to the USA and also, for the express purpose of discussing a US attempt to mediate peace, a US one. Both these, however, passed through the UK, enabling the British to intercept them. In particular, the British decoded the Zimmermann Telegram. It proposed that if the German campaign of unrestricted submarine warfare caused the USA to declare war on  Germany, Mexico should join the war against the USA and would regain the territory that it had lost to the USA in the Mexican-American War of 1846-48 after a victorious war.

Code-breaking during the First World War had been carried out by people from many walks of life, who mostly returned to their pre-war jobs at the end of the war. However, the importance of code-breaking and security in the war led Britain to in 1919 establish the Government Code and Cipher School, renamed GCHQ in 1946.

Attempts were made in the 19th and early 20th century to produce mechanical cipher machines, but these were too easy to break. By the 1920s, more secure electro-mechanical machines were available.

In World War II, the Germans had two code machines: the Enigma and the more secure Lorenz. The Enigma was a military version of a machine originally built for commercial use.

Before the war, Marian Rejweski, a Polish code-breaker, worked out the Enigma’s internal wiring, making it possible to decipher its messages, although it was still necessary to work out the settings, which were changed frequently. The Poles shared the results of their work with the British and French, enabling the British code-breakers at Bletchley Park to start reading Enigma messages far more quickly than if they had had to start from scratch.

The messages were intercepted at one of about 40 Y stations around Britain, transcribed, mostly by women and then sent to Bletchley Park to be decoded.

The settings of the Enigma machines changed daily, meaning that it was necessary to work out the rotor settings before decoding messages. Rejweski built an electro-mechanical machine called a Bomba to help with this process. The British version, developed by Alan Turing with Gordon Welchman contributing an important refinement, was called a Bombe.

The British used a modified Enigma machine called a Typex for their coded messages. It remained secure throughout the war. Once the Enigma settings had been worked out by hand and the Bombes, the message was put through a Typex modified to be used as an Enigma receiver.

The Germans had over 100,000 Enigma machines but only about 200 more sophisticated 200 Lorenz machines. The latter were used for the most secret communications between senior commanders. It had 12 rotors and 501 pins, compared with three rotors in an early Enigma machine, increasing to four for naval machines from late 1941. This hugely increased the number of possible settings, making it very difficult to break Lorenz messages. However, a breakthrough was made in August 1941 when a Lorenz operator sent a message twice with only minor changes and using the same settings. 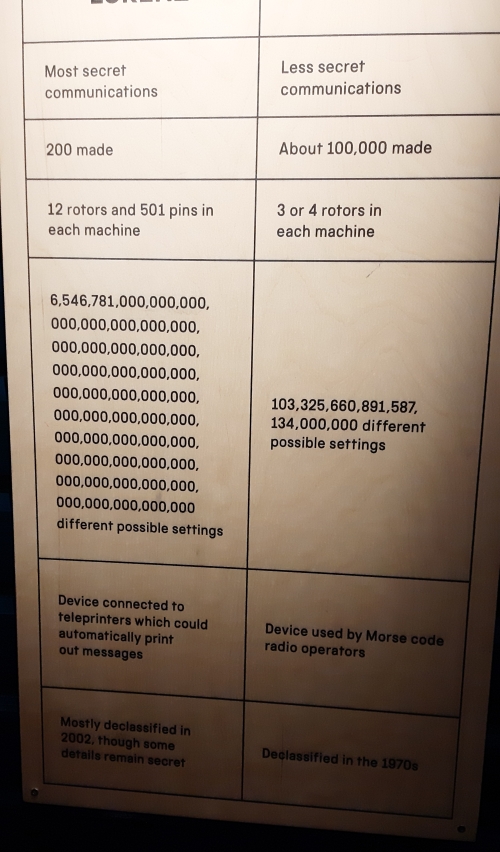 In 1943, Tommy Flowers, a Post Office Engineer [the British telephone network belonged to the Post Office until privatisation in the 1980s], came up with the idea that an entirely electronic machine could automate the process of working out the Lorenz settings. Many code-breakers were sceptical about using an entirely electronic machine because it would require thousands of unreliable glass valves.

Flowers, however, had the machine, called Colossus, operating by January 1944 and 10 such machines were in use by September 1945. The government regarded these early computers as being too valuable to reveal. Eight were dismantled for parts and GCHQ continued to use the other two for unknown purposes until the mid 1950s. Only a few parts remain today.

Amongst the Lorenz messages decoded after the introduction of Colossus was one that revealed that the German High Command had fallen for the Allied deception plan that the June 1944 landing in France was to take place in the Pas-de-Calais rather than in Normandy.

As well as breaking enemy communications, GCCS was responsible for keeping British government communications secure. The exhibition included a 1941 secure telephone, known as a Secraphone, used by Winston Churchill. This was an early model that could deter only a casual listener, more secure versions were introduced later in the war.

GCHQ, as GCCS became in 1946, continued in the same roles in peacetime. A secure telephone used by Prime Minister Harold MacMillan to communicate with US President John F. Kennedy during the 1962 Cuban Missile Crisis scrambled calls so that anybody listening in could not understand what was being said. Secure briefcase telephones that could be used by leaders when away from their offices were later developed. The example on display was used by Margaret Thatcher during the 1982 Falklands War to inform the Ministry of Defence of a change in Britain’s rules of engagement, resulting in the sinking of the Argentinian cruiser ARA General Belgrano.

In 1961, five members of what became known as the Portland Spy Ring were arrested. Three of them, a couple calling themselves Helen and Peter Kroger and a man going under the name of Gordon Lonsdale were KGB agents operating under deep cover. The Krogers were actually called Morris and Lona Cohen whilst Lonsdale was really Colonel Konon Molody of the KGB. The other two, Henry Houghton and Ethel Gee, were British citizens employed at the Royal Navy’s Underwater Detection Establishment.

Houghton and Gee copied secret documents, which they then passed to Lonsdale-Molody. He gave them to the Krogers, who transmitted them to the USSR using a powerful transmitter. They thought that the powerful radio signals from a military base near their bungalow in Ruislip in west London would probably mask their transmissions but GCHQ was able to monitor them and prove that they were in communication with the USSR.

All five were sentenced to long terms in prison. Lonsdale-Molody and the Kroger-Cohens were swapped for British agents arrested in the USSR. Houghton and Gee were released after serving nine out of 15 years and then married

By the 1970s some countries, notably the USA and the USSR had spy satellites orbiting the Earth. The UK had a network of military communications satellites called Skynet: the first was launched in 1969, 15 years before the first Terminator film featuring Skynet as the villain. However, for spy satellites the UK relied on the USA.

During the 1982 Falklands War, US spy satellites had other priorities in South America. The UK therefore decided to launch its own spy satellite, called Zircon under the guise of it being Skynet IV. The journalist Duncan Campbell found out and made a TV documentary revealing the existence of Zircon. Police raids and a court injunction delayed transmission and had been cancelled on cost grounds by the time that the programme was shown. The case did bring more public attention onto GCHQ.

As well as gathering signals intelligence, GCHQ today is concerned with combating cyber attacks on the UK. In May 2017, a ransomware virus called WannaCry infected the computers of thousands of people and organisations, including those of the British National Health Service. The UK and other countries believe that it originated in North Korea. The exhibition concluded with a number of recordings in which anonymous GCHQ employees talked about their work/.