On 25 July 1813 French troops commanded by Marshal Nicolas Soult attacked the Allies at Maya and Roncesvalles with the intention of relieving the siege of San Sebastian and the blockade of Pamplona. The Allies, contrary to Wellington’s orders, gave ground. 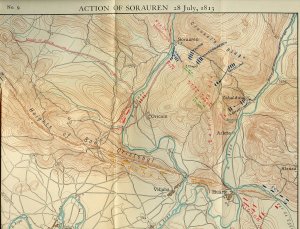 Wellington, accompanied by only his ADC, Fitzroy Somerset, rode towards the Allied army on 27 July. They reached the village of Sorauren, 10 miles from Pamplona, just ahead of the advancing French. The Allied army was drawn up along a ridge to the southeast, latter called Cole’s ridge after General Sir Lowry Cole. Wellington joined it to the cheers of the troops.

The French took up position along a ridge to the north of the one occupied by the Allied army, later called Clausel’s ridge after General Bertrand Clausel.  They were not ready to attack that day. A thunderstorm in the afternoon boosted Allied morale because there had been one before the battle of Salamanca. It delayed the arrival of reinforcements to both sides.

On 28 July Soult’s 30,000 men attacked Wellington’s 24,000 across the valley between the two ridges. Fighting was fierce, but the French assaults were beaten off. Allied casualties were 1,358 British, 1,102 Portuguese and 192 Spaniards dead or wounded. Around 4,000 French troops were killed or wounded.[1]

Soult’s offensive had failed, and his army was now in a position where it could not be supplied. His obvious course of action was to retreat the way that he had come. However, he was informed that the three divisions of General Jean-Baptiste Drouet, Count D’Erlon, which had missed the battle, were now to his right and rear. Soult decided to join Drouet in an attempt to cut Wellington off from San Sebastian. 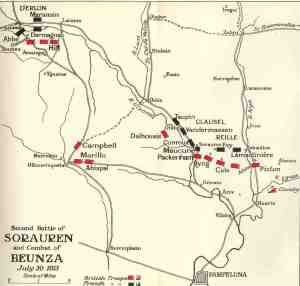 Soult’s attempt to disengage on the night of 29-30 July could have succeeded only if it was conducted in complete secrecy, but Allied pickets heard the sound of troops moving in the early hours of 30 July. At daybreak French troops could be seen withdrawing, and were bombarded by the Allied artillery.

Wellington then launched a series of co-ordinated attacks. The Allies were out-numbered, but French morale was very low and they were routed. The battle was over by noon.

Soult was able to withdraw the survivors of his army to France without another major battle, but his nine day offensive cost him 13,500 casualties out of 60,000. The Allies lost 7,100 out of 40,000 men actually engaged in combat.[2]

Charles Esdaile notes that it is hard to see what Soult hoped his offensive would achieve. He could not have resupplied Pamplona even if he reached it, and it would have been difficult to keep his attacking force supplied.[3]